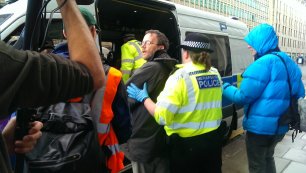 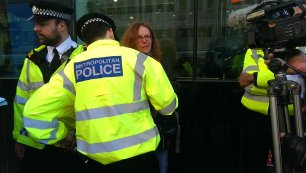 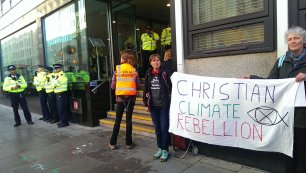 Three Christians were amongst 22 people arrested yesterday during a direct action in central London designed to make the government take urgent action to tackle climate change.

Ruth Jarman, 55, Reggie Norton, 85, and Fr Martin Newell, 51, all members of Christian Climate Action (CCA) were some of dozens of people who occupied the entrance to the Department for Business, Energy and Industrial Strategy (BEIS) yesterday morning, using glue, chains and lock-on tubes to attach themselves to the entrances to the building. BEIS confirmed that no one was able to enter or leave the building during the action which lasted around seven hours. CCA members worshipped and prayed during the action.

Yesterday’s action was the first in a fortnight of action co-ordinated by Extinction Rebellion. During this two week period, many people will risk arrest by engaging in non-violent direct action and thereby draw attention to the fact that we are damaging creation through anthropogenic climate change and the government isn’t doing enough to tackle it. Those involved are making the following key demands of the government concerning climate change:

The main day of action will be on Saturday 17th November and all are invited to join in.

Shortly before being the first of the 22 to be arrested, Ruth Jarman said, though tears:

‘If we don’t take action now, we will be the last generation who can.’

‘We are crucifying God’s earth, creating ongoing climate change that will cause disasters that would completely undermine any practical good work otherwise done. As a Christian I am called to act in solidarity with the crucified, and witness to God’s sacrificial love for His people and His creation.’

‘Many members of Green Christian feel solidarity with the protestors who will be gathering in Parliament Square on 17th November. The world is becoming an anxious place because government is failing in its duty to protect the people and the planet. Scientists are telling us that current policy commitments are falling catastrophically short. As history shows, some paradigms can shift only when people break the law.’

A recent IPCC report shows that worldwide temperatures are currently heading for 3°C compared to pre-industrial levels, most likely triggering uncontrollable escalation in temperatures, whereas we need to be aiming for 1.5°C .