A direct action protest was held on Good Friday outside the Heathrow Express at Paddington Station during the XR International Rebellion. Members of Christian Climate Action held a vigil and used chalk spray paint on the Heathrow Express train to call for government action on climate change and highlight the part played by the aviation industry.

A ten year old girl, Elsie Luna, was standing at the barriers of the Heathrow Express with a sign for Phil and Sheila, reading ‘Thank U for giving up your freeness for my laterness’.

Police came and escorted both of them off the premises. 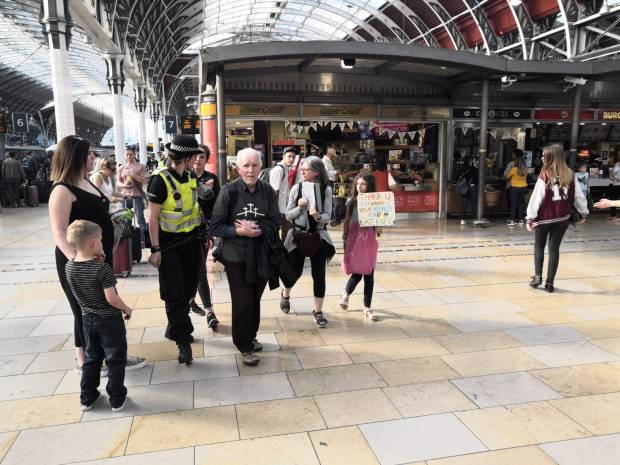 ‘This act is for my grandchildren. They mean the world to me and my heart breaks for the terrible inheritance that we are leaving them. Why are we expanding Heathrow when we are in a climate emergency?’

‘It is crucial that governments hear this important message this Easter. We are doing this because we are desperate. I don’t know what else to do to make them listen?’