This morning (Thursday, 17th), two members of Christian Climate Action, the Christian arm of Extinction Rebellion, climbed on top of a train at Shadwell station, stopping a train which was destined for The City. The two were members of clergy – Fr Martin Newell is a 52-year-old Catholic priest from Birmingham and Rev Sue Parfitt is a 77-year-old Anglican priest from Bristol.

A third member of the group, Phil Kingston, an 83-year-old ex-parole officer, superglued himself to the side of the train. He then knelt down on the station with two other members of the group and they held a prayer vigil.

Before the action Fr Martin, stated “we are acting to raise the alarm in a spirit of repentance for our complicity in sins against God’s earth and God’s poor. Parliament has declared a climate emergency but environmental issues were virtually absent from the Queens speech. We need action not words.”

Earlier on in the week, when giving a statement on his response to the aggressive police tactics being used against Extinction Rebellion, Mayor Sadiq Khan stated that he was “particularly angry at those targeting the London Underground – which would be extremely dangerous and counterproductive”. In response to these comments, before the action, Nick Cooper, a shoe maker from Northampton who took part stated that: “we don’t want to be causing disruption. We are not disruptive people we are desperate people. For so many years we have been writing letters to our MPs, signing petitions and joining in marches to draw attention to this climate emergency at our doorsteps. We don’t know what else to do. We are so sorry to anyone whose day to day lives are affected but sadly economic disruption is the only thing which those in positions of power will listen to. This train was destined for The City, which is one of the economic powerhouses of the world” 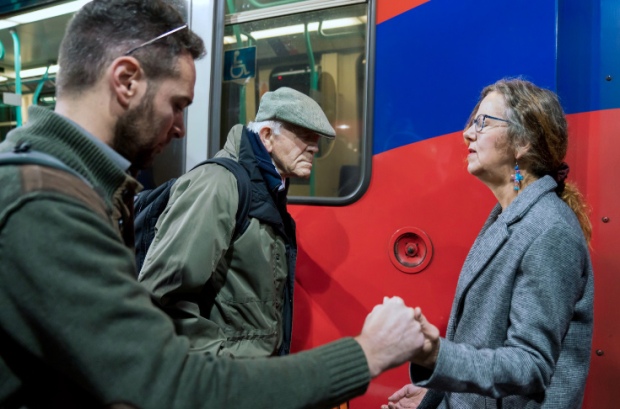 Before he was arrested, Mr Kingston, a devout Catholic from Bristol, said “I am doing this to ring the bell about the enormously dangerous situation our children and grandchildren are in. Greta Thunberg in her UN statement said we have 8 years in which to reduce CO2 emissions to stay within the 1.5 degree limit. So emissions need to be falling rapidly today. In fact, 2017 and 2018 saw record rises in emissions. For our descendants, for the poorest peoples and Gods other-than-human creation, there is so much suffering happening – now destined to get worse without huge national and international response.”

Ruth Jarman, who was present at the action, added some rationale for targeting the DLR: “We were targeting the city – one of the economic powerhouses of the world to cause economic disruption – because that is what those in power pay attention to. We have spent a lot of time blocking roads and are not being heard. People are dying now because of the climate crisis and it threatens all we love. We are sorry for disrupting the lives of ordinary people – we are desperate and don’t know what else to do.”

The group carried out the action as part of a wider action across the rail network. Police arrived at the scene and arrested the four members of the group.

Range of high res photos can be found through this link: https://we.tl/t-cw6KIrcIiO

All photo credits to Vladimir Morozov