Yesterday, Angela Ditchfield, 41, from Cambridge, was acquitted of causing criminal damage for spray-painting graffiti onto the headquarters of the Cambridgeshire County Council headquarters as part of an Extinction Rebellion protest last December.

The Christian Climate Action member admitted that she had used the spray-paint but plead not guilty on the grounds of having a lawful excuse to do so. 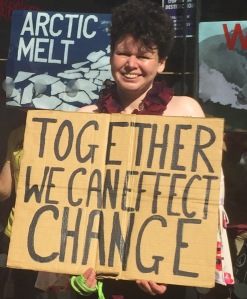 “We find that you have a very strong and honestly held belief that we are facing a climate emergency, and that you acted on the spur of moment to protect land and homes under threat from climate change, believing that immediate protection was necessary, and the action could be said to have been taken to protect property, and that you believed action chosen was reasonable in all circumstances. We applied the four-part test in Jones decision and we find you not guilty.”

In cases of minor criminal damage, acting to prevent immediate damage to property can be counted as a lawful excuse.

In the case, Ms Ditchfield gave evidence that she had tried to persuade local councils to act to prevent climate chaos for many years through standing for the Green Party, and through arranging meetings, petitions and letters. She said that their 550 page business plan for 2018-19 still contained not a single reference to the climate however, and the council continues to promote unsustainable economic growth and pursue highly destructive policies.

Ms Ditchfield also spoke of the immediate damage already being suffered as a result of negligent council policies – by people in Bangladesh whose homes are being flooded, African families whose crops are failing, the capital of Indonesia having to be moved because it is being submerged. Closer to home, children on her council estate are struggling to breathe because of air pollution.

“The climate and environmental emergency is not a morality tale set in a dystopian future. It is the single most significant problem that humanity has faced and it is happening right now, right here in the UK and across the world. As the Extinction Rebellion website makes plain, the world is suffering heatwaves, wildfires, storms, rising seas, flooding, ocean acidification, shifting crop patterns, the spread of disease – all of which is damaging property and contributing to the deaths of people.”

Angela also spoke in court of how she was motivated by her faith, and “by the love I believe Jesus put in me for our brothers and sisters around the world, and for the world He made us guardians of.”