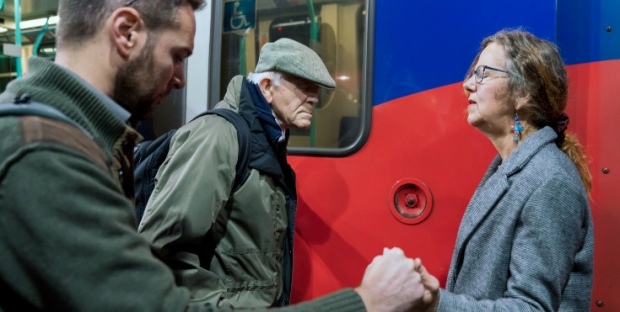 Phil Kingston, 85, was one of three Christians on trial in January 2021 after they stopped a train at Shadwell Station in London in 2019. Two people stood on top of the train while Phil superglued himself to the side of the train. All three were acquitted. Here are some extracts from the defence statement Phil read out in court.

My primary motivation for taking the DLR3 action was concern for my four grand-children’s safety and well-being in relation to world-wide CO2 emissions and subsequent rises in temperature. Climate change is a part of our experience which manifests itself as a loss. I expect that few of us in this court have not had a major loss in our lives. The one which had its greatest impact on me was the death of my father when I was three years old. That was to blight my relationships for many decades. I am a fortunate man because, thanks to counselling, I am now able to help others to embrace their grief. I regard this ability to help others as a gift of God.

I have concluded that runaway climate breakdown is already happening and will give you just one example of this. Last July the Amazon rainforest passed a critical tipping point. What was known as the lungs of the earth has become a net contributor to global warming. This shook me to my roots. I knew that this could happen but the Amazon’s sheer size had lulled me into a false sense of security. I had become deaf to the warnings of others, most especially those of the indigenous peoples. As this news sunk in, I remembered that many of the Amazon’s indigenous leaders had been killed in the last year for protecting the forests and rivers from destruction and pollution. As I sat with this news, I wept for them and for the loss of the Amazon.

Naturally, I thought about what this means for my grandchildren and their generation across the world. When I reflect upon the predicted increase in world temperatures of 2.4 degrees C and above, I feel frightened and disturbed. My gut response is to blank this out but if I do, these realisations return, usually in the middle of the night; and they are accompanied by a clear recognition that my running away from them will be of no help at all to my grandchildren. So my ongoing commitment is to be alongside them and help them build resilience for as long as I have life.

I am a Catholic and regard all other-than-human life as created by God and therefore to be cherished and protected by me. I regard us humans as an integral part of the web of life. As I see the destruction of environmental and climate eco-systems, I pledge myself to take a stand against that. I acknowledge that my behaviours contribute to this destruction. I. therefore. try to change my behaviours and contribute more to sustaining life. E.g. by not flying, trying to live more simply, buying my clothes in Charity Shops, and not eating meat unless someone has cooked a meal for me.

My understanding of the way of Jesus is that he stood in solidarity with poor and exploited people and spoke truth to the powerful. His action in driving out the money-lenders from the Temple forecourt remains a central inspiration to my climate actions. He was killed for doing that. The sanctions imposed upon me are not in the same league though for many in the poorer countries where the Global economy holds sway, death is a part and parcel of their life.

I include some information about Bera Caceres, a member of the Lenca tribe in Honduras. I do this because so many people in the poorest countries suffer from the largely uncontrolled power of corporations there. She was a brilliant organiser of tribal groups who were campaigning to protect the forest and rivers from pollution and destruction. She was awarded the prestigious Goldman Environmental Prize and 11 months later was assassinated by two men who broke into her house at night and shot her dead.

The action took place at Shadwell, an overground station in East London. We defendants were questioned by the prosecution about the efforts we had made to ensure the safety of passengers and railway personnel. Our own responsibilities for this were supported by the responses of 10 companions. Between us we ensured that the train alarm was pulled upon arrival at the station; that people sat in the doorways so that the train would be unable to start; that a member of the platform staff was told why we were there and that this was a peaceful protest; and that passengers were engaged with and listened to, and given information about another Shadwell station which was a minute’s walk away. Many passengers voiced their frustrations and concerns, such as being late for work or not getting a child to school on time.

Although our plan had been for the three of us to climb retractable ladders to the top of the train, I was impeded from doing that by a passenger grabbing the ladder, so I knelt down and super-glued my hand to the side of the train and two of our support team knelt with me. We were surrounded by a number of angry passengers but at no time was there any expression of violence. Kneeling down is probably experienced as not being threatening to others; and when those involved include a woman in her late 70s and a man in his mid-80s, we are hardly seen as a threat.

After Phil, Rev Sue Parfitt and Fr Martin Newell were all quitted, Phil wrote this:

The process of bringing this case to Crown Court took more than two years mainly because of the effects of covid restrictions. The Jury’s verdict of not guilty was a very encouraging experience and in our view is an indication that the public understanding of climate breakdown is growing and the pressure on politicians is intensifying. The rapid growth of Christian Climate Action in the last two years and the numbers who are willing to risk imprisonment is an encouraging sign that our churches are becoming more alive to what Pope Francis describes as ‘the cry of the earth and the cry of the poor.’