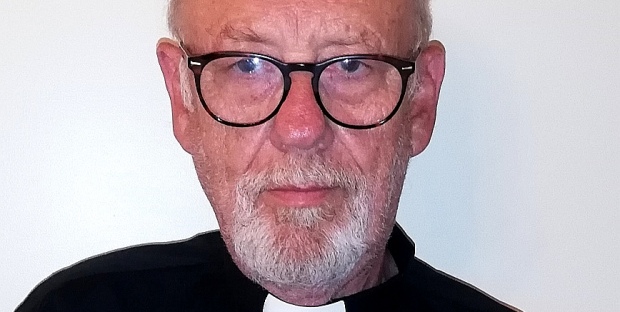 Rev David Jenkins was in court on 7th April 2021 charged with wilful obstruction of the highway. He sat in the road during the October 2019 Rebellion. He was found guilty, given a six month conditional discharge and ordered to pay £521 costs.

I believe my actions were a proportionate and reasonable use of our shared right to protest under the relevant provisions of the Human Rights Act. I did not come to the decision to protest lightly and not without also pursuing every course of action short of protest that was available to me. But, given the great harm and injury to person and property occasioned by social inaction in the face of climate change, my action was necessary and, given my firmly held Christian belief, a matter of conscience and sacred duty. I was in London on 7th October primarily because I was prompted by the Holy Spirit and also for good reason. My reasoning was based on the global political situation that then existed, extensive personal experience as well as scientific evidence of climate and ecological emergency.

In 2019 carbon in the atmosphere reached unprecedented levels and was growing at an unprecedented rate. The governments of countries covering most of the earth were in denial that climate change should impact policy and behaviour. Where not in denial, government and people in the global north were courting climate fatalism or a technological Panglossianism. These responses reflect an absence of neighbourly love and concern for the global south. Society needed a ‘wake up call.’

In my professional life I offered advice on land and property. Later, I taught Sustainable Development, among other things, with a role in an Environment Research Unit. During the last five years of my tenure I engaged in a development and climate related project in Uganda, partnered by the Welsh Assembly and the largest Welsh international development charity (of which I became a trustee).

During this time I came to experience first-hand the effects of climate change: unpredictable and intense weather events subverting agricultural norms, impacting food production, opening up new disease vectors and threatening communities. One such event was a landslide at Bududa after heavy rainfall that claimed 300 lives. One of my colleagues was present during this event and I visited shortly afterwards and witnessed the damage and the trauma. Larger development charities, like Christian Aid, demonstrated that events like these were not merely local, but that the whole development effort was being undermined by climate change.

I am a Christian and I believe that God is greater than the universe and is present throughout it, and that Jesus Christ is the model of human being. I have been active in church life serving in various roles including deacon, pastor of a Baptist church and most recently priest of a local parish church, though I am now retired. I am a Conscientious Protector and a novice Franciscan – bound by a rule of life that is premised on our connaturality with all living creatures.

I was starting to settle in to a more contemplative, retired life when on 8th October 2018, the Special Report on Global Warming of 1.5 °C was published by the Intergovernmental Panel on Climate Change (IPCC), based on over 6000 scientific references. This report was a call to action by governments, businesses and all citizens. Not to have responded to the threat of extinction would have been to die morally.

I attended a community meeting with our local MP and locally we established a group called Climate Matters. We set about informing the community of the risks associated with

environmental and climate change through the independent parish magazine. [As a rural coastal village we are also facing a tide of plastic on our beaches and agricultural effluent polluting our rivers and streams.] I discussed the issues with the chair of our local community council who acknowledged their limited scope for action. We invited our County Councillor to a meeting and she challenged us to become more engaged in local government. We accepted the challenge and organised public attendances at committee meetings and the Council Chamber, where the Chair of the County Council acknowledged our unprecedented engagement.

We learned that while the County Council was willing to declare a climate emergency and develop a strategy that would limit their own carbon emissions, they had little resource, and even less power, to impact the climate emergency. So, a group of us wrote to every member of the Senedd in Wales and later organised prayer vigils at the Senedd. The Welsh Government also declared a Climate Emergency but correspondence that I had with a Welsh Government Minister demonstrated again the lack of real resource in tackling the climate and ecological emergency.

I attended peaceful protests in Cardiff and Swansea and encountered Christian Climate Action and mindful of the promptings of Archbishop of Canterbury Emeritus Rowan Williams and Pope Francis, I attended the Faith Bridge events on Lambeth Bridge on the morning of 7th October. I was present at a series of interfaith services on Lambeth Bridge and enjoyed the singing, the addresses and joined in the prayers. These events were not challenged by the police.

Later that day, a senior police officer invited us to move to Millbank so that we could join with other faith groups. We were invited to approach via Westminster Bridge. When we finally arrived at Millbank we were confronted by a heavy police presence preventing our reaching the agreed destination. Eventually I made my way to a quiet place on a pavement. Subsequently I was confronted by a line of police officers who invited us to move. I was trapped between the officers and other protesters. The police then began to push me off the pavement into the road. It was quite a crush. I then sat down with others in the road. Within minutes of sitting, I was arrested. When asked to move I lay on my back in a vulnerable position indicating that I would not resist.

I sat in the road as an act of peaceful protest because humanity is systematically creating the conditions that have already kickstarted the sixth mass extinction and set the world on a path that will inevitably increase global temperatures well beyond those permitted by the Paris Agreement.

As a Christian I feel morally obliged to call out this systemic sin. As a priest and pastor I am called to care for and protect God’s creation and my fellow creature, to personally repent my part in this state of affairs, to reduce my carbon footprint and minimise my impact on Mother Earth. Adam and Eve took an apple from the tree of life, our society took an axe to the tree.

As a property professional I reasoned that it should be possible in law to defend myself and others against the wilful destruction of property that is occasioned by the ruthless pursuit of fossil fuel assets, both immediate and indirectly to the enjoyment of land. If my house is being broken into, if my property is being destroyed, I may stop the perpetrators forcefully. As a Christian I eschew this right to use force, but in a real sense our homes are threatened, our property and our very lives are in danger. Yet neither the government nor the law has so far defended us and pursues me for the alleged lesser offence and not the perpetrators of the larger offences.

As a retired priest of the village in West Wales where I live, I believe that I still have a duty of care for my community, not least in relation to some very specific instances of damage to property. Our village is threatened by rising water levels and marred by climate induced tree disease.

In relation to flooding, Natural Resources Wales (NRW) had produced maps showing its growing impact. These maps are due to be revised this Spring to reflect the latest science and data, available at Geocortex Viewer for HTML5 (cyfoethnaturiolcymru.gov.uk)

The attached photograph (Photo 1) shows an extract from the NRW Development Advice Map identifying an area that requires significant flood defence infrastructure. What is not immediately clear from the plan is that part of the area within the blue contains existing housing.

Even small rises in sea levels are likely to have a significant impact in coming years. Combined with intense rainfall episodes, flooding is already with us: the banks of a local river have been breached twice in recent months and while not on the same scale as the flooding to Carmarthen town, just north of us, is already posing risks to homeowners.

I attach a photograph (Photo 2) of the approach to our village, at the start of the recent flooding.

At the same time, ash die back, triggered by a slightly warmer environment conducive to the spread of a fungus, Hymenoscyphus fraxineus, has resulted in the deaths of trees with two affects. The first is that the wooded glade, through which runs the southbound entrance to the village, became potentially lethal to vehicle and foot traffic as trees began to collapse into the road. This necessitated the urgent removal of trees and creates the conditions for the next effect. The ash tree is a fast growing deciduous tree which prefers moist conditions and whose roots will spread wide distances to find water. Their removal also has consequences. Within 15 to 20 years of tree death, tree root systems lose most of their soil-stabilising function, increasing the risk of landslide.

I attach photographs (Photo 3 and 4) after the tree felling along the once attractive approach to the village. I have lodged a formal representation on the Local Development Plan consultation, which in its proposed form pays insufficient heed to the need to build resilience in our communities that will mitigate these harms.

Ours is a vocal community. We have many champions of community cohesion and resilience, many active in providing community facilities, cleaning our local beaches and pursuing government agencies for failures to enforce environmental laws. But the scale of breakdown is becoming a daunting task. There is a general sense that government should long since have

adopted the precautionary principle and behave as if they were in a climate emergency, a point that the Public Accounts Committee made forcefully in its report published on 5th March 2021. https://committees.parliament.uk/work/908/achieving-net-zero/

The response to Sars Cov-2 shows that an emergency response is possible. Tragically, we have seen two million excess deaths globally from Covid 19 in the last year. And yet recent research demonstrates that 5 times that number of excess deaths occurred in 2012 alone from outdoor fine particle pollution generated by fossil fuel combustion. https://www.sciencedirect.com/science/article/abs/pii/S0013935121000487

Despite the science and apparent commitment to treat the situation as an emergency, carbon emissions into the atmosphere continue to grow, here and around the world. Many fewer people now doubt the veracity of the claims that we were making on October 7th 2019. For me, the gap between words and actions is a failure of compassion.

As a husband, son, brother, father and grandfather I felt that I must use my constitutional freedom to protest peacefully while there is still hope. I regret the inconvenience caused to other users of the highway, but it pales into insignificance compared to the ‘inconvenience’ of the climate and ecological emergency.