A key contingent of those taking part are Christians, who have gathered under the name of Christian Climate Action. The group contains individuals of all denominations and includes youth, pensioners, clergy, parents, grandparents and those taking action around their jobs.

Former Archbishop of Canterbury Rowan Williams said Christian Climate Action was responding to the scale of our environmental crisis. He said: “Christians are called by God to show to the world what the divine image looks like – the image of a divine creator who brought the world to birth, called it good, and summoned human beings to reflect this divine care and delight through their own work in the world, animated by the gift of Christ’s Spirit. Christian Climate Action seeks to respond to that summons; in the face of impending environmental crisis, we need to encourage one another to grow more fully into the joyful responsibility we are made for.” 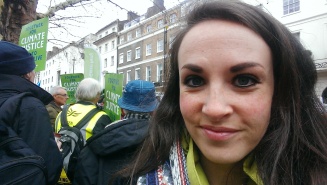 olly-Anna Petersen, 30, a member of Christian Climate Action who attends St Luke’s Church in North London, works as a mental health practitioner in the NHS. “The desperation and suffering that climate change is causing around the world breaks my heart” she said, “people are fighting for their very survival. This is not okay, this is an emergency and must be treated like one.”

“In the UK, people hear the science of climate change and are scared for their children and grandchildren. We have spent years going on marches, writing letters to our MPs, signing petitions and are frustrated that decision makers still aren’t creating the change needed. However, as Christians, we always have hope. My hope does not come from blindly repeating the same old strategies which have failed us. It comes from seeing ordinary people responding prayerfully to the challenge of climate breakdown – having the bravery to work through the anxieties that we each have and taking the action required.”

Churches around London have given up their facilities to sleep protestors. Many Churches are also showing their support for the Rebellion, by hanging banners and ringing their bells 12 times – in order to highlight that scientists have shown we have just 12 years until climate break down if we don’t act now. In Marble Arch clergy will be running environmental stations of the cross and a foot-washing action, as a way of supporting weary protestors.

Fr Martin Newell, 50, from Birmingham, is also a member of Christian Climate Action. He said: “As Christians, we are called to do all we can to stand up against injustice and for our common home. I don’t want to be arrested or go to prison, but if that is what it means to be faithful in the face of climate breakdown then I am willing do so, just as Jesus did after he turned over the tables in the temple. We know Christians are called to a sacrificial faith and that we are each called to do all that we can. Changing our light bulbs is not going to cut it. We need dramatic changes in government policy if we stand any chance of saving God’s beautiful creation and the humanity that he loves. Non-violent direct action is a strategy that can bring the political earthquake that is needed, and so like many faithful Christians before me, this is my response”.